Some years ago, a politician who will not be named here (they get enough publicity as it is) kow-towed to irrational pressure by ignorant civic activists and intimidated the state Department of Transportation to change perfectly correct signs on the Meadowbrook State Parkway for Sunrise Highway (NY state touring route 27) at exit M8E, replacing the correct control destination of "Montauk" with the inaccurate "Merrick." By contrast, the signs at exit W5E on the Wantagh State Parkway are correct, and no one ever felt a need to politicize them. They read "Montauk." Likewise, the signs on the Seaford-Oyster Bay Expressway (NY state touring route 135, which ought to be completed at least to Oyster Bay if not Rye and renumbered I-195) at exit 2E read "Montauk."

It's time to boycott these ramps until the correct control destinations are restored. 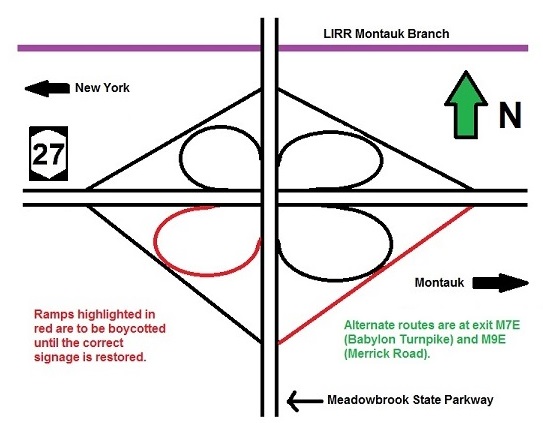 Also worth noting here is that just before this chicanery was implemented, smaller signs reading "Merrick Exits M7E M8E M9E" were posted, and Merrick was more justifiably posted (though arguably also wrong) on Merrick Road, so it isn't as though Merrick was not announced at all. Even if Merrick hadn't been posted as a control destination on Merrick Road, where else would Merrick Road go?

As alternate routes until this annoying nonsense is reversed, please use exit M9E for Merrick Road or M7E for Babylon Turnpike and then cut back to Sunrise Highway as necessary.

Apart from that, Captain Merik in the Star Trek episode "Bread and Circuses" doesn't come off as such a great character, though in the end he somehow manages to muster enough courage to save Captain Kirk and get himself killed for that act, and he should have bought a couple of consonants for his name somewhere along the way.