Eject Both Trump and Clinton

I was driving along the highway this morning and saw another political bumper sticker when my demented mind realized that most political bumper stickers today have a typo on them. It's only one letter, but it makes all the difference. We need Letterman from the Electric Company here to correct the letter that Spell Binder has obviously altered. Yes, friends, Americans, and countrymen, we need to EJECT both Donald Trump and Hillary Clinton. The Trump-Clinton ticket (yes, it's really Tweedle Dum and Tweedle Dee putting on a sham of an election) has effectively disenfranchised so many voters who have no voice in this election.

I'd love to print 50,000 of those bumper stickers: EJECT Donald and Hillary! Neither is qualified to hold any public office, not even dog catcher. Unfortunately, like most working-class stiffs who have been disenfranchised, I have to work for a living and don't have time for this sort of thing. You can print your own bumper sticker, though; just go to Duck Duck Go and look up "custom bumper stickers" to find companies that will do this for you.

It is long past time that we threw the bums out-- all of them! That's the only way to get better the next time around. Stop making lame excuses and do not vote for either of them. EJECT unqualified candidates; don't ELECT them by voting for them. If they do get elected, let it be someone else's fault. 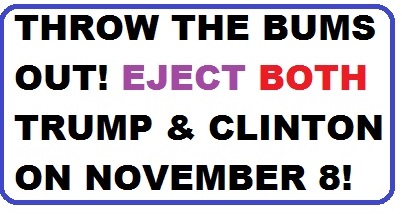