The word "believe" is not a verb that can stand on its own. Even if its object is not explicit, it must be implied. To state that one "believes" is a completely meaningless statement, useless in the extreme, and barren of any intelligence or sophistication whatsoever. So why does Macy's even bother putting it there at all? Are they suggesting that any belief is okay as long as one believes in something, anything at all? If someone believes in shooting innocent schoolchildren with an assault rifle, is that what the sign wants us to celebrate? Do we celebrate the dismemberment of innocent babies in the womb because their mothers (more likely others) believe that abortion is a human right? Or should we just stop this nonsense and get some meaningful objects behind that lonely verb that longs for a companion by its right side at Christmas time? 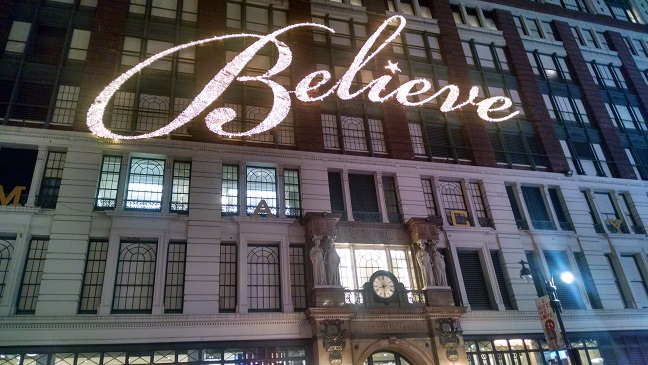 As for me, I believe in Jesus Christ, who came into the world at the bottom as a little baby, died for our sins nailed to a cross, and rose again on the third day to break open the gates of heaven and lead us to eternal salvation. That's worth the biggest sign money can buy-- but WE HAVE TO SAY IT! 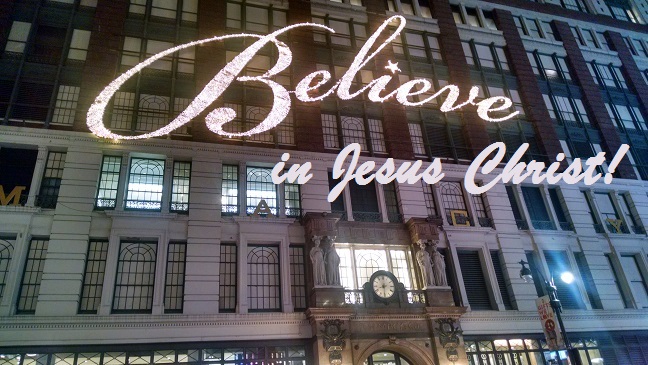