Just Say "No" to Scripts

It's about time the masses rose up and demanded their right to be script-free. Client-side scripts are arguably the worst thing that ever happened to Internet. They require the user to assume a risk that should rightly be borne by the web server-- the risk of running untrusted code. They are largely responsible for the proliferation of adware, spyware, malware, and other parasites that plague Internet. What to do?

Set your browser to prompt for scripts-- and then just say "no" to scripts. If the web site doesn't work when you say "no" then send a stern warning to the webmaster that he'd better cut out the nonsense and make his site work without scripts. Then visit other web sites-- such as this one-- that don't require client-side scripts in order to work properly.

As a side benefit, you will almost never get a popup if you say "no" to scripts-- popups come from scripts! Think of prompted scripting as your free popup blocker.

Internet Explorer is dying, but the problem of having scripts shoved down one's throat apparently isn't going away any time soon. If you use Firefox, the best solution is simple: install the popular add-in "NoScript." In some ways it works better than prompted scripting as one can unblock a whole site (though not individual scripts within a site as we could with completely prompted scripting). However, with NoScript, one can block useless scripts of tracking sites-- as well as of any other unwanted sites-- completely. It isn't perfect, but it has its advantages and is still far better than taking whatever code any webmaster wants to run on your computer (not his).

How to change your Internet Explorer Settings

Go to the menu bar in Internet Explorer and click "Tools." Then select "Internet Options." That displays the window on the left. On the Security tab, click "Internet." Then push the "Custom Level" button to display the window on the right. Scroll towards the bottom of the window. On each item underneath "Scripting," choose the "Prompt" radio button. Then push OK to that window and the previous window. That's it! Every time a silly web site wants to run a script, you'll be asked for permission (and you'll have a chance to prevent rogue code from running on your computer). If you really want to kill scripts altogether, select "Disable" instead-- but then you won't be able to run scripts at all, except if you place the site in the "Trusted Sites" zone (which may not be such a bad idea, really). 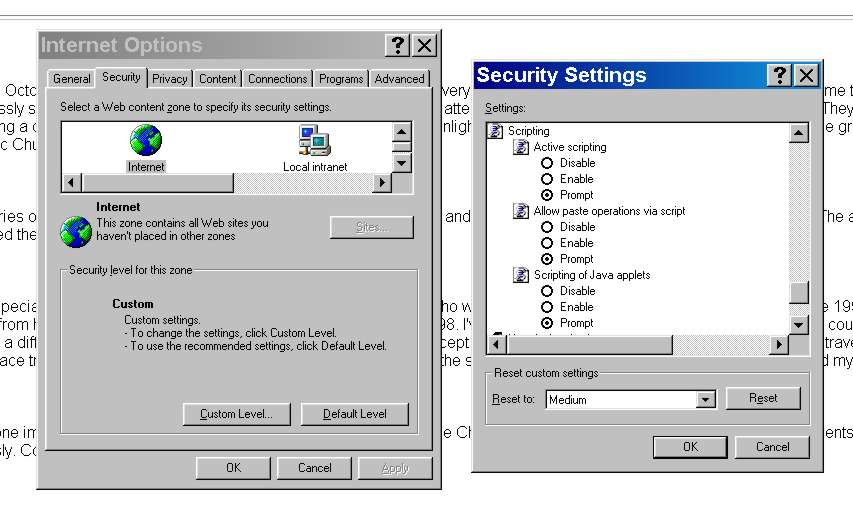 The Client-Side Scripting Hall of Shame

Viewable With Any Browser Campaign